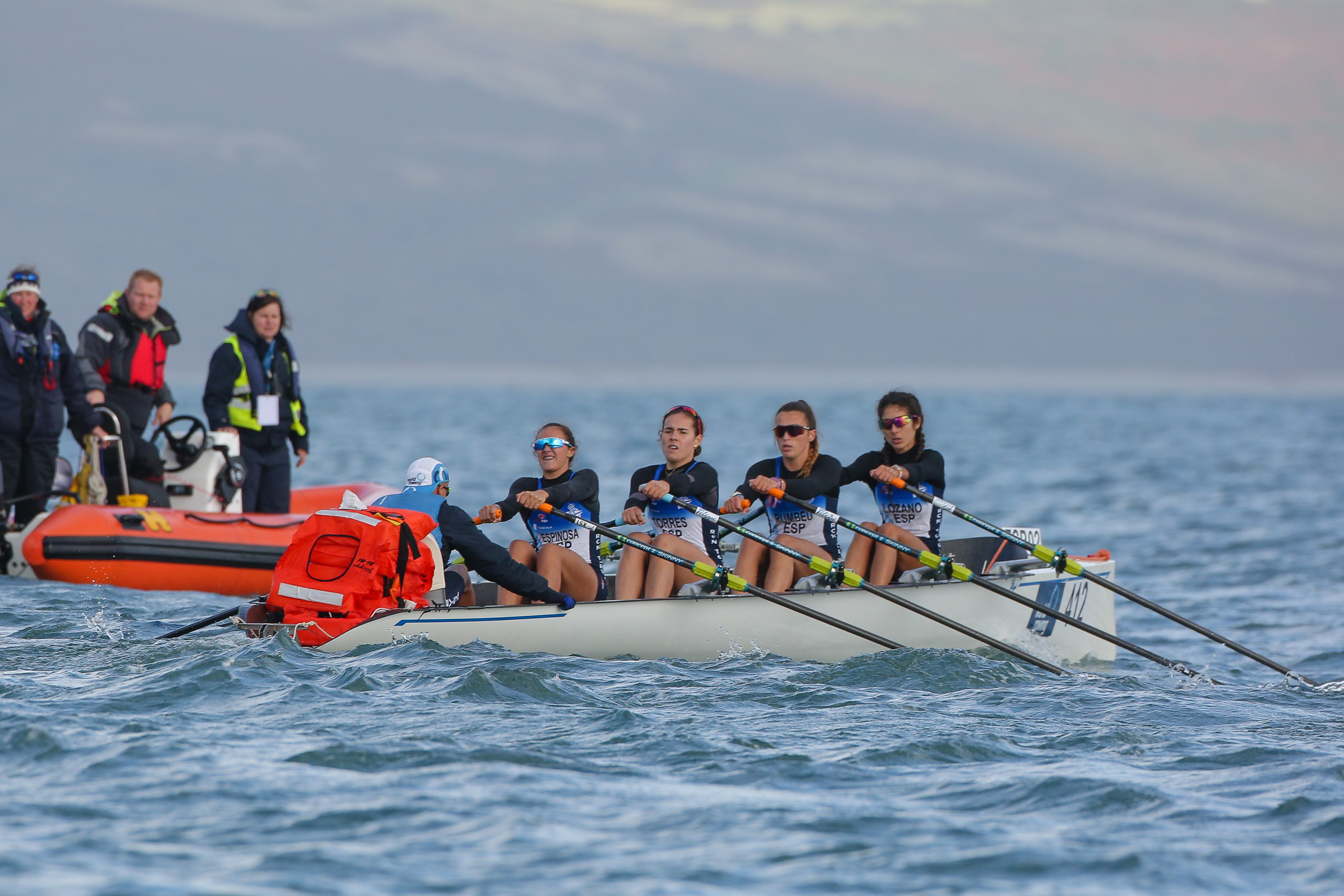 Day One of the 2022 World Rowing Coastal Championships featured exciting, close racing and constantly changing weather conditions, challenging the crews as they navigated the turning buoys. While the first race was rowed in a torrential downpour with almost no visibility, by the afternoon there was sunshine over the bay in Saundersfoot, and plenty to enjoy for competitors and spectators alike.

Heat 1 of the coastal women’s solo (CW1x) began in conditions which deteriorated throughout the race, challenging the rowers with wind, waves and poor visibility. Experience paid off for 2018 and 2019 champion Diana Dymchenko (AZE01, Baku RC), who led throughout to take the win, over 30 seconds ahead of 2021 bronze medallist Jessica Berra from Endaika Arraun Elkartea (France). Things had calmed down by heat 2, which was won by Janneke van der Meulen (NED03, RV Willem 3) by just 2.8 seconds from Miriam Sheehan (IRL02, Castletownbere RC), who rowed a tactically strong race.

Close contests in the double sculls

Monaco’s Quentin Antognelli had a great flat-water season in the men’s single sculls and is bringing that fitness into coastal rowing. He and partner Paul Mosser led heat 1 of the coastal men’s double sculls (CM2x) early on and held on throughout a close race. Heat 2 was won more convincingly by a dominant performance from Giacomo Costa and Eduardo Marchetti (ITA01, RC Genovese 1890), who took the lead with a high rating and ended up winning comfortably. In the last race of the day, the choppier water in the middle of the race proved decisive, allowing reigning champions Dennis Gustavsson and Eskil Borgh (SWE01, Stockholms och Höganäs Roddförening) to row away for the win.

Heat 1 of the coastal women’s quadruple sculls (CW4x+) began as a USA-USA battle, with the two crews from Next Level Rowing going head-to-head. USA01 lost ground when Brooke Wolford’s left-hand oar came loose from its gate, allowing ESP01 from RCMD Málaga to sneak up the inside and hold on for the win, almost 10 seconds in front of USA02.

Back to all posts